Know it's a Problem! 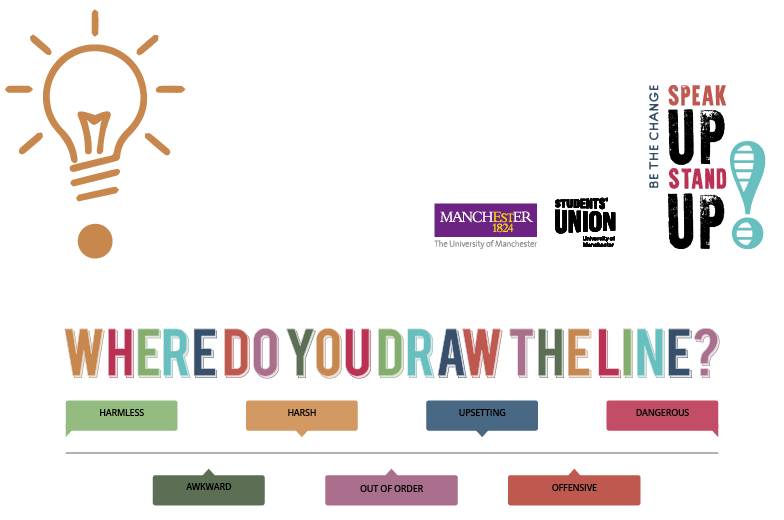 We want people to think about the impact of negative attitudes and beliefs, and micro-aggressions and how they can lead to more serious acts of discrimination, hate and violence.

There are a range of behaviours from healthy, respectful and appropriate to violent and abusive. Acts committed because of a person’s identity are often based on negative stereotypes about other people.  These can cause prejudices which can present as micro-aggressions. An active bystander is someone who when they become aware of a situation, understands that it’s a problem and takes the responsibility to act.

Don't be a bystander Speak Up! Stand Up!  Call it out and report it.

Where do you draw the line?

We use an activity called where do you draw the line to get people thinking and talking about their behaviour and the behaviour of others.

You can view a copy of the activity.

In this activity we present a series of micro-aggressions that students and staff have told us they have experienced. The aim is to open up the conversation and discuss the potential impact these behaviours can have.  We use this activity to explore all different types of problematic behaviour including:

The term micro-aggression was first used by Dr Chester M. Pierce in 1970 to describe insults and dismissals directed at Black people from non-Black Americans. This term is now used to explain the casual degradation of any socially marginalised group (Wing Sue, 2010).

Dr Derald Wing Sue describes these as brief, everyday exchanges that send condescending and potentially harmful messages to certain individuals, because of their group membership. Dr Wing Sue goes on to suggest that most people ‘harbor unconscious biases and prejudices that leak out in many interpersonal situations and decision points'. If unchallenged micro-aggressions can have a negative impact not only on individuals but they can re-affirm stereotypes and perpetuate concious or unconcious bias in others.

Where do you draw the line on homophobia?

In this video Freya talks about the impact of micro-aggressions.

As part of our campaign we are developing educational resources that will help us to explore these topics further.  If you have an example of a micro-aggressions you'd like to share that relate to any of the following topics:

If left unchallenged prejudicial attitudes can become normalised and we risk creating a culture of hatred and intolerance where bias and discriminatory behaviours are not seen as problematic.  A situation that can have potentially harmful and violent consequences.

Download a copy of this activity that encourages you to explore the impact of problematic behaviour and reflect of what you can do.

We want everyone to take responsibility and challenge problematic behaviour.

If you or someone you know has experienced problematic behaviour you can use the University’s Report and Support Platform.  This allows you to report something anonymously or report it and get support from a Harassment Support Advisor.

There are two ways you can tell us what happened

Speak to an advisor or Report anonymously